The forecast for Asia-Pacific for Wednesday

Kiwi Dollar traders are processing fourth quarter jobs data released earlier this morning, which showed a 0.1% quarter-over-quarter change. That missed the 0.4% q/q Bloomberg consensus forecast and was well below the revised 1.9% figure in the third quarter. However, the unemployment rate fell to 3.2% from 3.3% (revised), beating expectations by 0.1%. The miss is largely due to the spread of the Omicron variety in the months of October to December.

Today’s trading liquidity may be lower than usual due to the closing of many East Asian markets for the remainder of the week, including Chinese stock and bond markets. The Reserve Bank of Australia will, as usual, release its card pack following policy decisions. AUD/USD fell initially in response to yesterday’s policy decision, but the ailing USD helped reverse that movement shortly thereafter. RBA Governor Philip Lowe will speak today, which could potentially provide some news.

Oil prices remained broadly unchanged overnight, despite the risky tone of the market. WTI crude oil prices are trading at their highest level since October. Given those price levels, OPEC may choose at its meeting this week to increase production by more than 400,000 barrels per day in the coming months, which has been the cartel’s standard output bump at recent meetings. Elsewhere, gold and silver prices rose overnight on the weak USD.

NZD/USD has remained virtually unchanged in early trading, after gaining around 0.93% overnight. The 9-day exponential moving average (EMA) appeared to halt the pair’s advances, but a breach above the EMA could push prices near 0.67. Alternatively, a reversal lower would likely bring prices back to the trendline support, which supported prices last week. 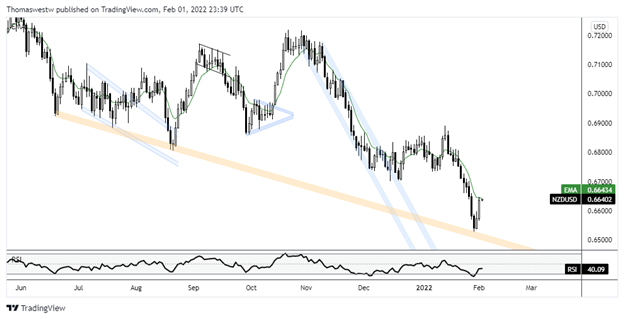