Snap, Inc. reported its first quarter profit, pushing stock prices higher in after-hours trading by more than 50%. This comes in the midst of a rosy report from Amazon, encouraging investors to switch to tech stocks after the Nasdaq fell on poor performance from Meta, formerly known as Facebook. Snap reached 319 million daily active users, pushing revenue to $1.3 billion. Analysts expected revenue of $1.20 billion in the fourth quarter, based on Bloomberg data.

The social media tech company saw free cash flow rise from negative $69 million in the prior year to $161 million in the fourth quarter. According to company guidelines, revenue in the first quarter is expected to be $1.03 billion to $1.08 billion. Earnings per share (EPS) rose to $0.22, more than double the street estimate of $0.10, on an adjusted basis.

Apple’s recent iOS changes recently caused significant disruption for tech companies, cited by Facebook earlier this week. Facebook’s stock price closed more than 26% lower today for reference. However, Snap reported that it has made significant progress in addressing those challenges. Pinterest, another prominent social media company, was up more than 25% after hours. The company beat revenue and earnings per share, $847 million versus $832.4 million, and earnings per share of $0.49 versus $0.42. 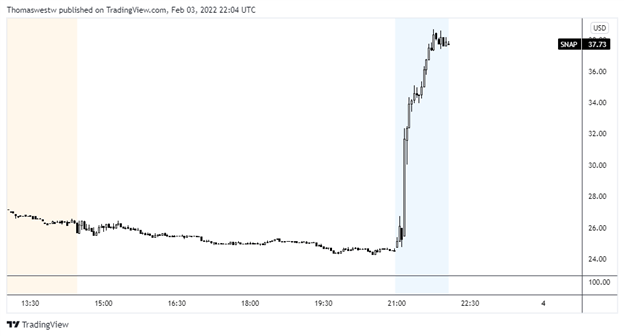